McGwire Did ‘Roids: Who Knew?

When news breaks WTIT: The Blog sometimes stumbles into it. We mean, it’s not like we are out there looking for something. Think about this seriously, we are single and have an awful lot of living to do. And it’s not as though you live longer being married. Although I can tell you honestly that when you are married it sure seems like you do.

The point? We don’t have one. But we found this out: Yesterday to the dismay of baseball fans everywhere, Mark McGwire admitted that he had done steroids for ten years of his career. What was most shocking was that he decided a blog written for a Tape Radio station that no one can hear would be a great place to speak his mind. WTIT tapped our director for all thing sports, Bud Weiser, to interview Mr. McGwire. 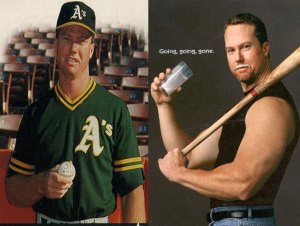 Bud: Hi, Mark. What possible reason did you have for finally admitting that you were on ‘roids?
Mark: I couldn’t stand the deception anymore. It was eating my innards.
Bud: You must have thick innards, because you’ve denied it for so long.
Mark: It was SO hard. I am the victi

m here. I never should have been born during the steroid era.
Bud: You mean played? And how the fuck are you the victim?
Mark: I was the one who had to tell my son. He was just a ten year-old in 1998. No one should have to tell their son stuff that they wouldn’t have done if I was born in say 1910. I had to tell my mommy and

daddy. And wife. And manager. And Bob Costas. And now you.
Bud: That doesn’t make you the victim. You caused all this yourself.
Mark: So I did a couple of low doses of steroids that it shouldn’t count. I don’t look like Arnold 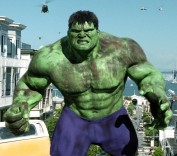 Schwarzenegger, do I? Wouldn’t I look like The Hulk if I did too many steroids?
Bud: Mark, you do look like The Hulk.
Mark: But I’m not even green!
Bud: It’s not easy being green.
Mark: Why has the world persecuted me for something that had no effect on anything?

Bud: You broke Roger Maris’ record of 61 home runs by

cheating.
Mark: How do you know I would not have hit 70 home runs anyway?
Bud: You mean a record that stood for 37 years and was only broken during the steroid era?
Mark: God gave me the gift.
Bud: What gift?
Mark: The hit-a-home-run-bigger-and-better-than-anybody gift.
Bud: You are shitting me.
Mark: You should have seen my Little League homers.

Bud: And this is relevant, how?
Mark: It’s God work.
Bud: No, selling alcohol is “God’s work”, not hitting homers.
Mark: Is too! Is too! Is too! God gave me the hand-eye coordination and bat speed.
Bud: Why do athletes think God is always responsible for their accomplishments? God has got to have something better to do than root for homers.
Mark: Not in my case, I am special.
Bud: So special that you fucking cheated?
Mark: You got it wrong. My body was a walking

twins, then?
Mark: He said that they weren’t good in bed.
Bud: How would God know that?
Mark: He knows all.
Bud: But he thought they were real? That’s not “knowing it all”!
Mark: I’m not here to talk about the past.
Bud: What are you here for?
Mark: I already cried on TV. I humiliated myself. Everyone thinks I’m a jerk. I’m not in the Hall of Fame. I was interviewed by Bob Costas. I didn’t need to come here and take grief from you.
Bud: Why did you come here?
Mark: I wanted to meet the French twins.
Bud: That’s it. We are SO done here. I’m Bud Weiser and that’s the way it isn’t, on January 13, 2010.

Thanks for joining us. We will be back.
This is not our final post. We hope.
That’s a wrap on WTIT: The Blog.
Mark won’t leave the studio.
He’s waiting for the twins.
But we will survive. Join us next time.
Same time. Same blog.
WTIT: The Blog
Loading Comments...