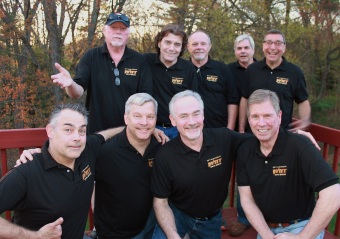 1. How old do you look? We are all told that we look younger because we all lie to each other. I’m 65. I think I look my age. If you look at this shot, the back row is all 65 but Greg, who is 67. Kneeling only Gary is 65. The others are younger. Rock is 62 and Midnight & Captain are 52. Yes that means they were 2 years-old when WTIT started.

2. Where do you live? New England.

3. Are you waiting for something? Yes. Could be important.

4. What’s one pet peeve of yours that is not common? I hate the sound of a clicking clock. Hate it.

5. Do you want/have kids? I have four kids and my 7th grandchild will be born next month. 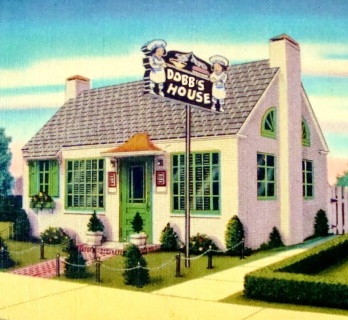 Our church on Sundays for WTIT

6. Have you ever thought about converting your religion? Nope. I’ve been a firm agnostic for too long. My dad used to say an agnostic was an atheist that would not commit. I’d always respond that atheists were like Catholics, both thinking they have all the answers.

7. Last shocking news you heard? Trump won the election. I may never understand it.

8. What was the last thing you drank? Diet Coke.

9. Who do you most look like in your family? My son James. When he was five he saw 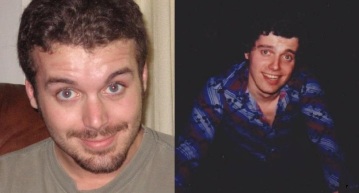 a picture of me when I was five. I asked him who the picture was of. He said, “It’s me.” And I said, “No it’s me at your age.” At the time saddle shoes were big and I was wearing them. James squinted and said, “Same eyes. Same face. Different shoes.” To this day (He’s 35) when we’re told we look alike we always respond, “Different shoes.”

10. If you could have something right now, anything, what would it be? My house sold.

11. Where does most of your family live? My mom, sister and I live in Connecticut. My brother and my son Ben (and their families) live in Boston. My daughter Julie lives in Rhode Island and my son James in San Diego. My daughter Heather and faqmily live in Jersey. All together – “WHAT EXIT?” 19 is the answer. Near Rutgers.

12. Where did you grow up? West Hartford.

13. Where do you want to go on vacation? St. Anywhere.

15. What can’t you wait for? The aforementioned house to sell. Open House today!

16. When’s the last time you told someone you loved him or her and meant it? Everyday with Kathy.

17. Have your parents ever smoked pot? My dad tried it.

18. Want someone back in your life? Only in the WTIT 50th Anniversary sense. The only two guys missing were Gypsy (very ill, he has stage 4 COPD.) and Harvey. Gyps helped launch WTIT and was with us from day one until a night in 1974. He’s the only “starring” or main guy who wasn’t there. Harvey backed out at the last minute. While he recorded with us, he was a peripheral player at WTIT.

19. What do you order at the bar? Usually a drink.

20. When was the last time you cried really, really hard? I can’t say.

21. What are your nicknames? Bud is it. Oh, and “Buffalo”. When we started WTIT I was “Buffalo Bud Weiser”. DJs with a surname were big in the 60s. That’s why the original guys were: Galloping Gary, Jumping Johnnie, Bouncing Billy and Killer Joe (Gypsy).

22. What is your favorite thing to eat with peanut butter? Reeses.

23. Where were you on July 4th, 2008? As random questions goes, this wins. It’s better than yesterday’s hammock in the front lawn brain teaser.

24. If you could go forward in time, how far forward would you go? Four or five hundred years.

Have a great week! We will be back in this space again. Same time. Same blog.
-30-