1) Have you ever danced the polka? Every day. I get up in the morning and wake my wife and say, “Honey, It’s Polka Time!” We jump into our Polka outfits and dance to our favorite, “Beer Bottle Polka.” (I’m the one in the dress.) Then we flap our arms to fly away.

2) The centerpiece of a traditional Polish polka band is the accordion. The accordion is a substantial instrument. Have you ever tried to play it? Right after I broke my neck I said to my wife, I gotta learn an instrument. Where can a get a great accordion? 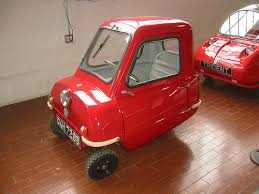 Who the fuck would drive this?

3) The plump lady of this song cannot fit into the singer’s car. How many passengers does your car comfortably seat? One.

4) Would you like to lose a few pounds? No thanks. I’d find them again.

5) In the long ago 1940s, this song was considered amusing. Do you think it’s still funny today? You thought I listened to a polka? Why bother? They all sound the same. At my first radio gig I had to engineer a two or polka show. Two guys who only spoke Polish hosted. If I put on the wrong song they’d come in yelling. I’d smile. They yelled louder. Then I’d bow.

6) Arthur Godfrey, who recorded this song, was a popular radio and TV host from

the 1930s to the 1970s. Before this week’s Saturday 9, had you ever heard of him? Of course. I’ve been alive long enough to wonder why anyone would watch the dude.

7) One of his more popular radio shows was Talent Scouts. A 1940s-50s version of American Idol, this show gave previously unknown singers their first national exposure. Godfrey could point with pride to having helped discover Tony Bennett and Patsy Cline, but he made a mistake by rejecting Elvis Presley. Tell us about something you’d do differently if you could get a “do over.” Quite a bit. Got six hours?

8) In 1953, Godfrey made news by having one of the nation’s very first hip replacements. Have you ever been/would you be part of a clinical trial, either for a new drug or a new medical procedure? I already did. I had a staph infection in 2003 from a back operation. My doctor tried three anti-biotics that didn’t work. He said there was a new drug he hadn’t ever tried. He said if it didn’t I’d have to put my affairs in order.

9) RANDOM QUESTION: You and a friend are shopping. She tries on an expensive sweater and enthusiastically asks what you think. You think it looks awful. Do you tell her the truth? Of course. It isn’t like she wore it to work and asked you. I’d add, “But you’re so ugly that it would take folk’s attention away from your big nose and ugly teeth. So yea, I love it…”

Here’s hoping life is good with you. We’re selling the house and I forgot how stressed out that you get. I’m gonna see my mom today. She’s in hospice, I think I’ve told you that. Two week’s ago she said, “I may not see you again. I want you to know what a truly wonderful son you are.” We hugged as I cried”. But I did see here again last week with my son Ben. It’s a surreal time. I may be back for Stealing. But, I will be back. Same time. Same blog.