With A Little Help From My Friends at WTIT

Posted by Bud Weiser on September 11, 2016
Posted in: Uncategorized. 4 Comments

Sunday Stealing: The Alice Through the Looking Glass Meme

If your life was a book, what would be its title? “The Tales of Tape” Since I’ve recorded my life since I was 17, I think it’s all there. Or as I wanted it presented at the time.

Who is/was the weirdest person in your life? I think my college roommate freshman year is that guy. We were great friends for about a year. But he lived in a fantasy world. I’d come home at night and he’d be lying on the floor with headset on with a friend who was doing the same thing. I’d say “Whatcha doing?” Not because I cared but I always knew it would be funny. He’d say were listening to “Tommy” (Rock opera by The Who) were writing a movie that would be like “Yellow Submarine”. They’d be so stone it was hysterically funny.

What is a special thing that someone once did for you? I ran out of gas on the Mass Pike near

Boston during a white-out blizzard. While I was cursing the gods (this was long before cell phones) a man stopped, drove me to get gas and drove me back to my car. He would not take the $20 I offered or money for the tolls. As I got out he asked one thing of me: “Pay it forward.” I like to think I have.

If you could erase someone off the planet, who would it be? It would be some cruel dictator. We have so many, naming just one is impossible. I’d like to beam Trump to his home-world where bull shit is truth, but not see him hurt.

What’s a big goal that you have? I just want to keep getting better at my job and be able to retire in five years’ time.

If you could time travel and meet yourself at 16, what would you tell yourself? Don’t get married until you’ve had success on the radio.

If it were the last day of your life, how would you spend it? With loved ones and Smirnoff.

If you could meet any celebrity, who would it be and why? I usually say Paul McCartney. But today is the celebration of 50 years of “Star Trek”. So I’ll go with Bill Shatner. Oh wait. I’m going to meet him! And I get to get a photo with him next month. He is bringing his one man show to The Bushnell (Think Radio City or the like kind of venue) and for $50 you can get a photo with him. Already paid for. I can’t wait!

What is one thing that you would never do that o 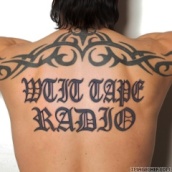 thers you know have done? A tattoo.

What is one romance depicted in film that you’d love to experience? I have not seen one that rivaled those I’ve experienced. My favorite to watch is “Notting Hill”. I fall for Julia as Anna Scott each time.

Describe yourself in just one sentence. I’m a clever guy who loves family, The Beatles, Star Trek, M*A*S*H, The Yankees, The Patriots, UConn basketball and big cat documentaries, who recorded his life with his friends at WTIT.

Who is the most beautiful person on earth? For sheer beauty I’d go with Jennifer Lopez.

What was the best experience in your life? I have had a lot of crazy romance stories that it’s hard to pick out a single event. And yes, I know that I’m lucky.

If you could rule the world, what would you change? No wars or hunger is a great place to start.

Where were you when you heard the news of 9/11? I was at work at Northeast Utilities. I remember saying to a woman that we’d never forget each other since we were together that day. It is true. I think of her each and every year.

Allison contacted me and asked if I’d stay on to host Stealing for another month. I really have been enjoying doing it again. That’s why you’ve not seen pleas from me for a host. I told her that it was her’s to take back when she wanted to. But if she didn’t, I would continue it. I’m very proud of the weekend meme’s I started a decade ago. Oh. I just got my new TV delivered. It’s a 65 inch Ultra HD set. It was on sale Labor Day weekend at P.C. Richards for 43% off. I paid just $679. I can’t wait to watch a movie on it. Have a great week. See you soon. Same time. Same blog.