1. SURFER GIRL : “I have watched you on the shore, standing by the ocean roar, do you love me do you surfer girl”

Were you ever interested in someone (other than a celebrity) who did not return your interest? Of course. The best advice I got upon becoming single after my first marriage was, “Everything is timing.” You can have chemistry and wonder, but if you are at different points in the “what you are looking for” department, it is doomed. So if someone does not return the interest, it may not be you. It just might be that moment. 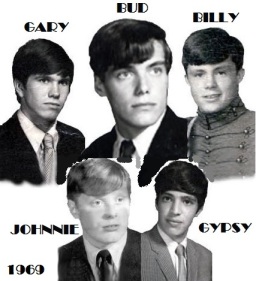 girl or guy…”Looking back, how do you feel about your high school days? They were great. Everything revolved around WTIT. Along with the original five DJs, Gary, Joe, Billy, Johnnie and I, we had DJs Bull, Carter B, Teddy Q, Ken, Hunt and Benny. So, we had instant parties. We taped and spoke with our girlfriends and many parties had a WTIT music tape running. We never could have imagined that WTIT would last to record a 45th anniversary show. A now we are months before our 50th in 2017.

3. FUN FUN FUN : “…and she’ll have fun fun fun till her daddy takes the T-Bird away…”What was the worst punishment you received as a teenager? I can’t remember any. Believe it or not, I was a pretty good kid. I pulled some shit, but I never got caught.

4. I GET AROUND : “Round round get around, I get around”Where did you go on your last long trip? San Diego to see my son James. It is a spectacular city. I hadn’t seen him in a long time, so it was great catching up. He called me last weekend. He got promoted and will train in New York this week. I’m off this week and is job (Godiva retail) is paying for a train so that he can stay with us after training on Wednesday. They are flying him out of Hartford as well on Sunday!

ONDA : “You gotta help me Rhonda, help me get her off of my mind”
What do you do to cheer up after a personal tragedy such as a lost job, power outage or broken relationship? Drink Smirnoff.

6. CALIFORNIA GIRLS : “I wish they all could be California girls. The west coast has the sunshine an 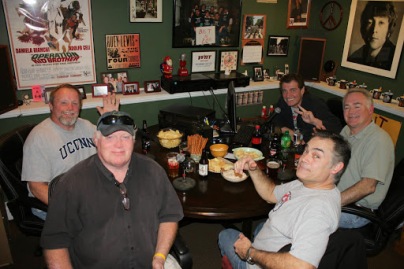 d the girls there get so tan, I dig a French bikini on Hawaiian island dolls, by a palm tree in the sand”Where are the best boys found? Around the WTIT Studio table.

8. WOULDN’T IT BE NICE : “I guess the more we talk about it, it makes it harder just to live without it, but let’s talk about it…”What is your biggest wish? I haven’t mentioned yet that after I published this fucker I realized that there was a cadence that seemed familar. Then I checked. This meme was written by Kathy for a now defunct meme “Rock ‘n Roll Fridays” in 2011. I started to tell this story on the Stealing blog, but then realized that it didn’t matter. I was surprised that it didn’t hit me when I found it. My big wish then was to buy a house with Kathy. Now it seems that we’ve lived here forever. Now I just want my marriage to work out. It seems to be going well.

9. IN MY ROOM : “There’s a place where I can go and tell my secrets to. In my room. In my room.” What is your favorite thing about your own personal room or space in your home/office? The WTIT Studio has been in my home since I was 15. It is my sanctuary. 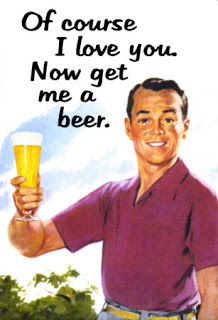 10. GOD ONLY KNOWS : “You never need to doubt it, I’ll make you so sure about it. God only knows what I feel about you” When was the last time you told a significant other or close relative that you loved them? Kathy and I say it all the time. I’ll have lots of chances today. My older kids and their families are coming here for a picnic. We’ll see my son Ben his wife Maria and their daughter Zoey. My daughter Heather, her husband Alec and daughters Lauren and Lindsay. Seeing my dgranddaughters is always special!

12. KOKOMO : “We’ll go to Kokomo. We’ll get there fast and then we’ll take it slow. That’s where I wanna go…” What is your favorite warm weather destination? If I were to grab Kathy and set a destination it would be St. Martin. Other than the fact that she hates the beach, this plan is awesome.

13. DO IT AGAIN : “Let’s get back together and do it again…”If you could go back in time and gather up your school friends, what would you do again? I gotta share my original answer from 2011. “In a heartbeat. I’d love to do one more tape with the original WTIT DJs. Ironically, four of us 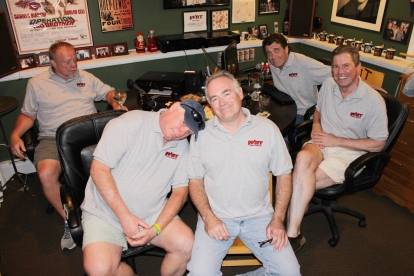 Only Rock was not an original DJ, he’s only been with us 25 years. Bouncing Billy (top left) Johnnie has his head on Rock’s shoulder and Galloping Gary, who always sat next to me back in the day, is next to me again.

live locally for the first time in years. Johnnie Walker has been me with me at WTIT since the beginning. [Gypsy] and I occasionally email through facebook since he’s moved back. Gary is still in D.C. We email, but it’s not like we get together when he is in town. I have not seen Billy since I ran into him in 1987. But, I would love for us to have have one more Tape Radio show together.”
Now here’s the irony: In 2011 we were just recording a couple of times a year. In 2012 we started a monthly thing would be in order. The “Billy” that I refer to returned in 2013 and hasn’t missed a session since. In 2014 Galloping Gary had read on our Facebook page when we were recording and just showed up. I wish a had a picture of my surprise. So I did get that night. Only Gypsy was missing, but it was close enough. I can remember looking around the table that night just soaking it in. Johnnie has since moved to Colorado. So the only shot of four or five of the originals again will be at our 50th. We told Johnnie that we’ll pay to fly him out since he’s retired and on a tight budget.