I’m Not Your Father’s Age

Posted by Bud Weiser on January 24, 2016
Posted in: Uncategorized. 8 Comments

Do you like to see it snowing outside? Yesterday’s blizzard postponed my family’s Christmas party. My daughter and her family were on a cruise on Christmas, so we scheduled it for yesterday. My son’s family in Boston could have made it, but my daughter’s family in in Jersey. They got hit. My son Ben couldn’t wait a day longer to tell him what his Christmas present was to me. You see I’m still a radio geek. While my radio days centered on music, I really enjoy talk radio now. Specifically, sports talk radio. Driving around all day, you need something to rest your mind.

year. I started listening to WFAN in New York as soon as they moved to 660 AM so I could hear it. I loved Imus and tolerated Pete Franklyn. He was an old dude who spent his life covering Cleveland teams. He was impossibly to like but that was his shtick. But it didn’t last long when they decided to pair their weekend guy who had started doing they sports on Imus, Chris “Mad Dog” Russo with the station full time fill-in dude, Mike Francesa. Thus “Mike and the Mad Dog” was born. They were together 19 years and broke up in 2009. Mike stayed at the Fan and continues to be number one in his time slot, Chris was off to Sirius Satellite Radio and that was that. 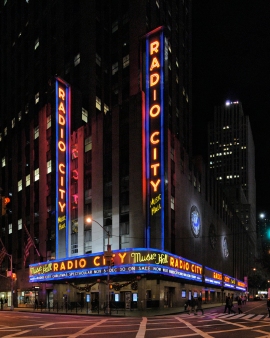 Until last month when it was ridiculous to think they’d do anything together again. But the owner of the Knicks and Rangers (and Madison Square Garden) was also a fan. He got them to do a reunion show at Radio City Music Hall for charity. I was thrilled! Since it sold out in 10 minutes, I was thrilled when I heard that is was to be aired on TV and radio.
Which brings us back to yesterday. He and my granddaughter, four year-old Zoey, made a video telling me that Ben got us tickets for the show on March 30! A weekend with my son in New York – doesn’t get better than that!! Oh, what was the question? Oh. I hate snow.

Do you tell your family you love them enough? You couldn’t. But I do we all say “love you” after a phone call.

Do you like getting jewelry or do you not wear any? I don’t wear it. A wedding ring was about it. I always thought married guys not wearing their rings was disrespectful and no matter 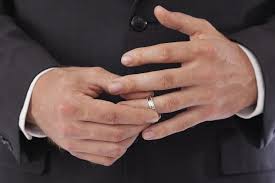 the excuse, if you’re not wearing it you want to get hit on. I last wore one until Kathy announced that she was leaving. It took her a few weeks to notice and she asked when I stopped wearing it. I told her that I took it off the minute that she told me. She took hers off then.

Do you watch a lot of NFL football? I always watch the Patriots. (Today at 3 vs. Denver and the winner gets to the Super Bowl.)

Have you ever used the word ‘lame’? Yes. What a fucking lame question.

Are you/Were you in a band? If so, what was your band name? No. I’ve often said it was because of my love of music and horrific singing voice that I became a DJ.
When is the last time you went to the doctor? Wednesday. It was my cardiologist. She thinks I’ll live. Until I don’t.

Do you own any shirts with a peace symbol on it? Yes, a black tee.

Would you ever go to Japan? I cannot imagine being on a plane that long. But then again, I never thought I’d go to Radio City Music Hall, so you really never know.

What was the last thing you went to Walmart for? I don’t go there. I mean, I’ve been there.

But I shop online. The only retailer I see is Dollar Tree. You cannot beat reading glasses for $1. I drink Diet Coke – I mean a lot of it. It helped me quick smoking in 2004. I’ve always been a Coke guy – no Pepsi or RC. For some reason I bought a bottle (it comes in almost 3 liter bottles) of their diet cola. I loved it! I can’t tell it from Diet Coke. I used to spend $6-8 buying bottles as I drove my sales route. Now it’s $2.

Ever gotten in a car accident? Yes.

Have you ever been in a choir? Yes. I know that I told you that I can’t sing. How I made it, I can’t tell.

Do you like the color of your eyes? If not, what color would you want them? Yes.

When was the last time you went ice skating? I think it was when I was trying to teach my son Ben to skate so he could play hockey. Anyone who’s had a kid play hockey knows how much a commitment that it is. $$$$ + 4 AM practices because

Hockey and I parted ways when The Whale left Connecticut.

rink time is so hard to get. I told Ben that if he played basketball that I would coach. If he has ever played in a hockey game it would be news to me. Wow, that was over 30 years ago…

Have you ever had a surgery? Ha! I have had 9 back surgeries and one neck surgery. I am in constant pain. But they do have me on meds for it.

Do you look older or younger than you actually are? I get told that I look a lot younger. But I think a lot of people hear that. When I was at Looney Tunes (a comedy club) on New

Year’s Eve (I warmed up the comics and played music before and after) a 21 year-old woman came into my booth for a request. She obviously had a date. Since it was New Year’s. But that didn’t stop me from hitting on her. The kissing lasted went minutes. So we started seeing each other. On our first date she said, “I know that you’re a lot older than I. I’m fine with it. Unless you are my dad’s age then it would be weird.” I responded, “How old is he?” She said 38. I responded that she need not worry and that I was not her father’s age. The truth was that I was a year older. But I also knew that this wasn’t gonna be a long term thing. We had fun. 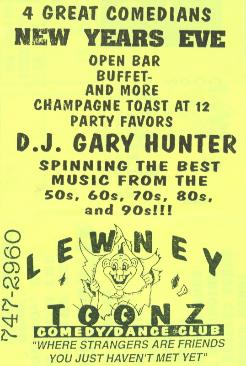 When is the next time you’ll be up on stage? I’m sure that Mike & the Mad Dog will call me up. Seriously, I even once got called up on stage (“Hey folks it’s our old friend Gary Hunter! Gary c’mon up,,,”. I was at Looney Tunes after I left working there. I was with three couples and the woman I was dating named Beth. The owner called me up. I was trashed. Somehow while on stage I was completely coherent. My date was impressed.

Where did you spend your last birthday? Right here in the WTIT Tape Radio studio.

What is the last show that you watched a full episode of? Big Cat Diary. I love everything about nature shows, but lions are my favorite. This show was shot over a period of years, so that you get to follow the animals. They stopped making it years ago, but every few years I watch the entire run.

Do you know anyone who lives in Utah? No, but my sister-in-law is a Mormon if that helps any.

Is there anything you need to work on doing soon? Yes. I’ve got some paperwork for my job today.

Do your feelings get hurt easily? I don’t think so.

Do you, or do you know someone who has taken karate lessons? Rock Rolling is a black belt.

Were you ever a boy or girl scout? No, but I have bought cookies if that helps at all.

So it’s a Sunday and what have you done? Another day over and a new one’s begun. And so it is Sunday and we hope you have fun. The near & the dear ones, the old and the young. Next week has a WTIT recording session in it, so I’m not sure that we will be live. But whenever we write a post again, we hope you are there. Same time same blog.

8 comments on “I’m Not Your Father’s Age”