Here’s Looking at You Kid

1) This song is about love at first sight. Do you believe that immediate attraction lasts? No. As I’ve stated here many times, I don’t believe anything lasts forever. I think people come in and out of your life. I’ve said that having been married three times, each time what I wanted out of the relationship was completely different.

2) The lyrics mention “a breath of spring” and robins singing. Now that we’re deep into winter, what do you miss about spring? Everything. I hate the fucking cold. I always thought I’d be in warm weather long ago. 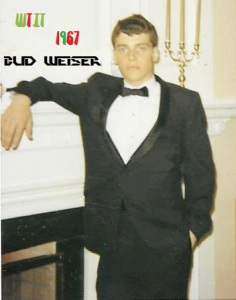 The only pic from WTIT in 1967 was that of Galloping Gary. When going through my dad’s stuff I found this pic that my mom wrote “May 1967” on the back. Our first recording was that month. Weird, no?

3) Though the world knew her as Judy Garland, this week’s featured artist was born FrancesGumm and her family called her “Baby.” Does your family have any pet names for you? Since I wasn’t christened as “Bud”, yes. It wasn’t until WTIT began (I was 15) that all my friends called me “Bud” whether we were recording or not. Since I’m a “Jr.”, it was my mom who asked if I’d like the family to call me “Bud” as well. I thought it was very cool so I said “yes”.

4) Because she was petite — just 4’11 — it was obvious when Garland gained even a few pounds and consequently she battled her weight her whole life. Now that we’re in the new year, have you made any resolutions about your own diet? Not yet, but I’m working on it. My weight is fine, but I eat a lot of junk. Not that a resolution has anything to do with it since I don’t even attempt them.

5) The year this song came out, 1939, was the year Garland’s most famous movie, The Wizard of Oz, was released. Which of her three traveling companions is your favorite: Scarecrow, Tin Man or Cowardly Lion? The Scarecrow. I’ve been searching for a brain a while, too.

6) Barry Manilow enjoyed Judy’s performance of this song so much he did a “dream duet” with her and included it in his recent CD. What performer who is no longer with us do you wish you could have seen in concert? John Lennon.

7) Judy had a terrible problem with tardiness. Are you usually prompt? No. I generally say “I’m sorry I’m late” to whatever is going on.

8) During World War II, Judy worked tirelessly to entertain the troops. Tell us about a cause that’s near and dear to

your heart. I’ve said often that it’s “Our Sister’s of the Tiny Breasts”. They raise funds for implants. Why should just rich women have all the big breasts?

9) The American Film Institute lists Garland as the 8th greatest movie star of all time. Who is your all time favorite actor or actress? I’ll go with Jill Hennessy. I’m not really sure that I have one. During Hollywood’s Golden Era I’d say Bogie. In the 60s I’d say Sean Connery. I’ll stop here. If I post this any later it would be like the proverbial tree falling where no one was there to hear it.

Johnnie in our Gatewood Studio in 2010. He has recorded with us from 1968. He left once to live in Colorado in 1973. He was replaced by Many Miles. Miles left us to marry and move to Atlanta. Johnnie moved back and took back his place. He never left again. That is until this year.

Hope all is well. We set our next recording date up for January 30th. Johnnie Walker is the only member of our “Original 5” that has recorded throughout almost every era with me. We would have never kept WTIT together without him. He has had it hard. His wife left him to return to Colorado where they met. She ended up marrying her high school boyfriend. Wait it gets weirder. Johnnie’s daughter moved there as well and wound up marrying her stepbrother. They have a baby, Johnnie’s first grandson. His older son lives in Colorado as well.

A friend of his has offered him a very inexpensive apartment so he’d move back. A couple of months ago he spoke with me about it. He said he would not move if it meant destroying WTIT. I laughed and told him that his happiness was much more important. When I checked in with him about this month’s date he said, “My third to last recording.” It hit me then. But Bouncing Billy’s return will probably ensure we move on. Keep the faith! Join us again. Same blog. Same time.

8 comments on “Here’s Looking at You Kid”