Sometimes You CAN Get What You Want 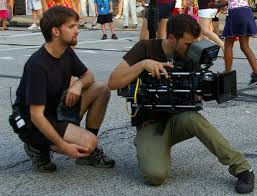 1) The video was shot on a street corner in Echo Park in central Los Angeles. If you saw a film crew making a video in your neighborhood, would you stop to watch? Or would you just keep walking? I would explain that I was in the Neighborhood Police and either they should move or give me a walk on role. I would not ask to sing. That would be nasty.

2) The singer says he remembers his girl in every dream he dreams. Do you remember if you dreamed last night? Yes. I dreamt of Train’s groupies. Yikes!

3) The band Train is from San Francisco. Have you ever visited The City by the Bay? Briefly. I was flown to the San Fran in 1995 when I interviewed for a radio job. The job was in Modesto but they gave me a tour of San Francisco to get to know me. I got the job. My wife at the time did not want to move. 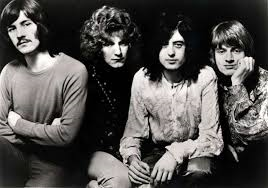 5) In doing research for this week’s Saturday 9, Crazy Sam discovered a publication called Trains, The Magazine of Railroading. What’s the last magazine you flipped through? Probably “People” or some shit like that while waiting for a doctor. Which doc? No idea. I see way too many. Particularly for a somewhat “healthy” dude. 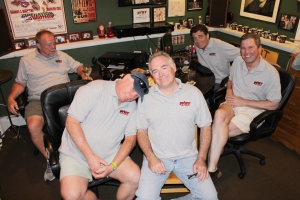 This past July. From left: Bouncing Billy, Johnnie Walker, Rock Rolling, Galloping Gary & me. Only Rock wasn’t with us from the start. He’s only been with us 27 years.

6) Do you consider yourself a leader or a follower? Leader. Shocking, no? The first lineup at WTIT was myself, Johnnie Walker, Galloping Gary, Gypsy Grillo & Bouncing Billy. Only Johnnie stayed through all the changes that followed. I had said to Johnnie over the years how much I’d like one last crack with the original lineup. He’d laugh and say, “We haven’t been in touch with any of them. Will they just walk through the door?” We’ve told the crazy story of how Bouncing Billy returned in 2013. We decided to track down Gypsy since I had been back in touch with him, thanks to Facebook. So Johnnie, Billy & I went to Gypsy’s apartment in June. Billy drove me. On the way he stated, “You always could get us all together. You are a great person to run the show…” I think I mentioned that all this lead to a shocking surprise the last time we recorded. After what he called his 32 year break, Galloping Gary showed up for our last recording. I sat looking at 4/5 of our original lineup that night. Close enough. Only Gypsy has never returned.

7) Scholars tell us that “To be or not to be” is Shakespeare’s most quoted line. Give us another one. Et tu, Brute?

8) How do you listen to music on the go? Car radio? CD changer? iPod/mp3 player? Your phone? I use my iPod. I’m shocked that you didn’t ask about 8 track…

9) Are you a convincing liar? I wouldn’t think so. I don’t lie often.

See you next time on the Tape Radio blog…

12 comments on “Sometimes You CAN Get What You Want”