It’s Not Over Because It’s Too Much Fun

With my three granddaughters. From left: Zoey 3, Lindsay 8 & Lauren 12. I do also have a newborn grandson, James. We have not met.

that makes you smile: My grandchildren always bring joy. I don’t see them nearly enough. Next weekend, I will spend a day with my 3 year old. I’ve only been with her at family events and she tends to gravitate toward her mother and other children. This time I’ll get a full day with just my son and her.

that makes you cry: Running out of Smirnoff.

that you love to do on the weekends: I’m all about TV. My mom used to use it to baby sit me. It’s been a love affair ever since.

that you do for only yourself: This blog comes to mind. We are all a bit narcissistic here. But I’ve made great friends and as The Gal once wrote me, we can say things that are only going to read by our blog friends. On Facebook you have to be SO careful. It’s what drew me back. I really thought I could just walk away a couple of years ago. After a few weeks I sorely missed you guys…

that you have in your underwear drawer that’s NOT underwear: Socks. You’re a creepy sort.

that you do before going to sleep: Take my meds and set up my WTIT iPod. When my first marriage was crashing(the one to my 4 children’s mother) I was so depressed that I started listening to master tapes of WTIT Comedy. I used a Walkman. (It was the late eighties). I’m not depressed any more. My kids so need me to stay but with the constant fighting, I knew it was the right thing. Both my oldest children have often said that they were relieved at the time that the noise stopped. But I never stopped listen to comedy as I drift.

that you do within the first 15 minutes after waking: After the usual stuff I go online.

that’s in your purse: that you actually LIKE to clean: Allison, I know you do a better job than I did. But I did edit out or change sexist questions…

that you DETEST cleaning: My mind, so I generally don’t. 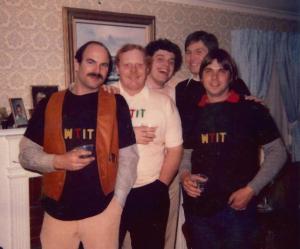 that other people would find odd about you: People who I try to explain WTIT to. Now with work people I say we’re playing cards and the like. Although now it is a bit different with our website and blog. My senior year college roommate who recorded briefly in the mid 70s recently wrote me to say he is in awe on how I kept it together. There were years we did not record. In 1982, I wanted to record again that I decided to throw a “Fifteenth Anniversary Last Tape Show”. It had been a few years since our previous recording session  and I want to “tie a bow” on it and of course get one last night as “Bud Weiser, WTIT”. Johnnie Walker (The only other one of the original 5 who has been with us since the begining) signed off and said to me, it’s not over you know Bud. It’s too much fun…” By 1985 we returned to weekly recording. We invite Bouncing Billy to it (He had not recorded since 1974) and we were thrilled that he joined us after an 11-year hiatus. So we had three of the original 5 to train the new guy, The Cosmic Commando, whom we immediately just called Cos, was trained by Billy and essentially took his seat because Billy never returned. As I’ve mentioned before, Bouncing Billy’s return in 2013 could never have been expected.

that you feel you HAVE to do before you die: Nothing that I’d share here.

I just love my Rocu. Rocu is one of the devices that allow you to watch streaming videos of your TV. Now I set up channels on my you tube page and can watch the TV shows whenever I like. I started doing it for Star Trek web series, but now have many channels of my own. If you don’t have such a device email e and I’ll further explain. It costs about $60 bucks and their no further charges! I will probably not return here till August. See you then. Right here. Same time, same blog.

Leave a Reply to I Carried a Watermelon Cancel reply