Gary Hunter was the name that I used in radio.

1. Last time you had butterflies in your stomach? My last significant nightclub job was in a comedy club. I took requests and did so stand-up to warm up the audience. I worked hard at it because I thought of doing some stand-up at the time. After I had left the club, I brought a date and some buddies to the club. The owner insisted I did a bit of stand-up. There were several problems with this, The first was that I wasn’t prepared and the second was more significant: I was too high to be on stage. We had been doing shots. The butterflies were enormous. But I carried it off. I just looked at the audience and joke about what they were wearing, asking couples what motel they were headed for after the show – all part of what I did there. Then I reintroduced the owner and rushed back to my seat while the getting was good.

2. What was your last alcoholic beverage? I haven’t had it yet. When it comes to alcohol I am not a quitter.

3. Who can you trust? In the past my first answer would have been “my dad”. But his mental health is not great. There’s my wife and kids. And all my WTIT friends. Johnnie Walker just did a cross country trip seeing Memphis, Nashville, New Orleans, St. Louis, Chicago, California & Colorado. He’ll have great stories when we record this Friday night.

4. Where was your first kiss with your current significant other? In her car as she dropped me off after we met to discuss her idea of doing a Dialtone Disco reunion. She was a huge fan of mine who tracked me down some 35 years after the fact. We never had that reunion, but we wound up married. Go figure. If you don’t know about those days, there was a recent letter to the editor in New London’s newspaper “The Day”. Click here to read it.

5. Favorite Band? The Beatles. Here’s another clue for you all: The Walrus was Paul.

6. What is something you’ve learned about yourself recently? I’m remarkably lucky at my age to have never lost someone close to me other than grandmothers. I was prepared (as well as one could be) for my parents to pass. She’s 90 and he’s 88. I did not plan on my father going out with delusions and dementia. What I’ve learned is that I’m not handling it well at all.

7. Do you like anyone? Oh, a high school meme. Whoopee!

8. Do you know anyone who is engaged? The realtor that sold us this house is a radio buddy of mine and once was my boss. He and his now fiancée came to our wedding. They got engaged recently. It’s his third. So is mine. 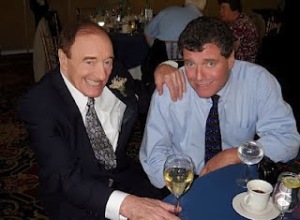 My Dad & I at my sister Amy’s wedding.

11. Did you ever go to camp as a kid? Two miserable weeks. Ted William’s baseball camp. Ugh.

12. When was the last time you cried? I’d like to get away from this if it’s all the same to you.

13. What is one thing you miss about your past? Being a rock DJ. Morning shows and nightclubs. I was my best there.

14. What is one thing you’ve learned about life? Never attribute to malice what could more easily be explained by stupidity.

15. Are you jealous of anyone? Anyone who’s doing a good morning show.

16. Is anyone jealous of you? You’d have to ask “anyone” now wouldn’t you?

17. Has a friend ever used you? Oops, I forgot the high school thing. Yes, I’ve been used and abused.

18. Has anyone recently told you that they like you more than as a friend? Recess is over, get back into the fucking school.

19. Who was the last person you drove with? My wife.

20. What are you looking forward to? We are going to see Godzilla in 3D today.

My sister Diane just called from the hospital. My dad’s UTI has infected his blood. He has no concept of reality. But enough already. I swear I’m not looking to make these posts as pity parties. We will be back. Peace & love. See you then…