Dale and Holley Return to WEEI

After a 25+ year career in radio, I still love playing “program director”. I was at WBCN in Boston in the mid 90s when WEEI became Sports Radio WEEI. As a huge fan of WFAN, I was skeptical. But while The Big Show was terrific, The “A-Team” with Dale Arnold & Eddie Andelman was terrible. In my present position I drive a lot of hours every weekday. WEEI took over a Northampton Mass. station and we were reunited. The morning show was now Dennis and Callahan. The midday show was Dale and Holley. I was a fan  from my first listen. When it was broke up three years ago in an attempt to save The Big Show, it left a huge void. Holly and Ordway were okay, but what made Michael great in the midday, and The Big Show great in afternoon drive (Glenn and his rotating cast) killed 2 shows. But what was SO much worse was the firing of Glenn Ordway for Mike Salk. What were they thinking? Mike Salk was awful. Sorry, I can’t sugarcoat it. The show was unlistenable. The hip Holley tried to salvage to uptight Salk, but it did not work on ANY level. 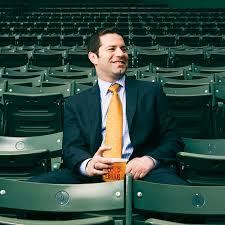 Salk and his WEEI fans

The Boston Globe wrote a piece on how bad a fit Mike Salk was for WEEI. Salk saw the writing on the wall. Within seven days he left the station to go back to Seattle from which he came. After a rotating search for Michael Holley new partner they did one thing right. They paired Holley with Dale Arnold on occasion. The chemistry was still there. I admit that I was pessimistic that they’d get it right. I had comment that perhaps they’d decide Arnold was too old to compete with The Sports Hub, WEEI’s competition in Boston. But yesterday, they got it completely right. Dale and Holley were back. Dale was signed to return and the top rated mid day show is now where it belonged, in afternoon drive. I’d love to say WEEI came to their senses, but in truth the program director that screwed WEEI up, had left. The new team corrected a huge mistake. Dale and Holley are back and better than ever.

The last gasping breaths of The Big Show.

Now to address the elephant in WEEI’s radio room. Mut (half of the current midday show that replaced Dale & Holley) has got to go. His announcing style is an Arnold rip. There I’ve said it. Somebody had to. When I recently heard Mut, Arnold and Holley explain what happened to the three of them, I was riveted. Michael tried to ease the rift between Mut and Dale. When it came out that Mut’s start was as an intern with Dale it all made sense. Lou Merloni (Mut’s midday partner) is a huge talent. He’s great at both talk radio and doing the Red Sox broadcasts. But WEEI’s next challenge is to find Lou a new midday partner. Dale Arnold is back. His poor man’s version is a “gotta go”. Mut seems like a nice guy. He’s just way over his head.

And yes WEEI, you should call me. I’d consider a return to radio programing in a second. But seriously, I feel I’ve provided serious dialogue to the conversation of what WEEI should do going forward. But do not worry, I will continue this multi-award winning  blog. But we will be doing much more talking about sports radio. I think we’ve got perspective that not too many folks have. So we will cover Sports Radio. You can here WEEI recordings here.

Our next review will be of The John Feinstein Show on CBS Sports Radio. Join us then. Same time, same blog.