It Took 50 Chinese Guys to Make Sense Out of It

Thanks to Gal for authoring this meme. Click on the Sat-9 header directly below to play.

Unfamiliar with this week’s song? Hear it here.

1) Spring, summer, fall or winter: which season do you consider most wonderful? If anyone answers “winter” after this year, they are certifiably crazy and should be banned. I don’t mean from Sat-9. I mean from anything and everything. I’ll take spring for $100 Alex.

2) Crazy Sam learned this song when she played flute in the high school orchestra. Did you participate in many after-school activities? I was an actor in what we call “The Drama Society”, a rather pretentious name. I just got bit parts. In my senior year I was completely passed over for the spring play. The first day of rehearsals the lead was sick. In was asked to read his part so they could rehearse. Ten minutes in the teacher/director yells, ”STOP!” I thought “Am I so bad he’s gotta critique me for a part I was gonna play anyway?” He asked me, “Why the hell didn’t you audition this way?” I replied that I got too nervous at auditions so now it was easy to act. He said it was a shame because I was the best actor in the school. Two days later the gods smiled my way. The lead kid who was sick had mono. I got the lead part 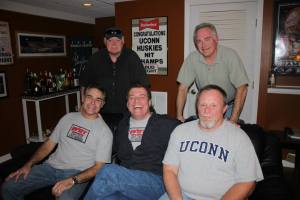 3) The flautist next to her in the orchestra was Jeanne Pepitone. After a little Facebook spying, Sam learned that Jeanne is now Jeanne Moran, a nurse with a husband and a daughter. Sam shot her a “friend request.” Do you keep up with your high school classmates? Yes. Two of them still record with me at WTIT. The others I hear from routinely. Facebook helps the process a lot! That’s how I got married…

4) When she performed with the school orchestra, Sam was required to wear gray slacks and a black sweater. What are you wearing right now, as you answer these questions? A shirt and sweat pants.

5) Sam was especially dedicated to the school orchestra because she had a crush on Mr. Hanley, the school’s musical director. He was the dark/thin/sensitive type. Tell us about a teacher you remember, and why he or she stands out. I had a crush on my eighth grade English teacher. She was from England. She once said, “I do not get your football. You kick it all the way done the field. Then the other team brings it all the way back. Why don’t they just leave it there?”

6) Because Sam was so crazy about Mr. Hanley, she was desperate to attend his band camp. Her parents wouldn’t allow it unless she could pay her own way, and so she didn’t get to go. Were your parents strict or permissive? If you have children yourself, what’s your parenting style? My folks could be strict, but generally were reasonable. I think I was the same way with my kids. The older two have both told me they thought I had all the answers. They have kids of their own now. I still miss my kids. I mean as kids. That look that they thought I knew everything. You never get that again. Having grandkids is pretty cool, too.

7) Sam liked Fridays because her favorite food, fried rice, was served in the school cafeteria. When you eat Chinese food, do you use chopsticks or a fork? A fork. There was a Chinese restaurant that we loved in college. It was in the heart of Chinatown in Boston. It had no décor. It looked like a cafeteria. The food was CHEAP and they were open 24/7. We could not figure their angle out. That was until one day during a late lunch about fifty Chinese men came in and they all stared at a board written in Chinese. Then it was erased and new characters replaced the old. A ton of money exchanged hands and the 50 guys left. We were eating at a gambling facility. Now it made sense.

8) When Sam was a little girl, a new box of Crayolas could get her pulse racing. Now she loves her Sharpies. Do you enjoy shopping for school/office supplies? No.

9) Do you have any plush toys? Or did you give them all up when you left childhood? No and so yes.

Hope you are doing well. They decided to let my dad have visitors again. My sister went yesterday. Let’s just say it did not go well…  We will do this posting thing again. Same time. Same blog.