Thanks to Gal for authoring this meme. Click on the Sat-9 header directly below to play.
Saturday 9: As Time Goes By 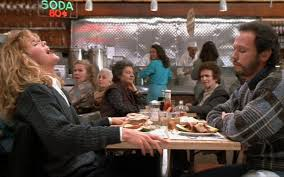 1) This is the theme song of Casablanca, generally acknowledged as one the screen’s great love stories. In honor of Valentine’s Day weekend, what’s your favorite movie romance? My favorite romantic comedy was Notting Hill. But, of course, the plot was rather absurd. So, I’ll go with When Harry Met Sally. The movie had the full range of emotions including a break up and realization that being independent and married are not exclusive goals. In my case, it was an email from a fan of mine when I was “The Hunter” DJing radio and nightclubs. Someone chased me down that I had not seen in 35 years. Now she’s my Valentine, wife and best friend. I mean, you never know what’s next. I didn’t give up my independence but I did change the tone of the WTIT Blog. I think that’s why I put it to rest. But I missed it, and particularly my blog buds. So it is back. I even wrote a post this week that had nothing to do with a meme.
2) Even though he was only 5’8 and had a receding hairline, Humphrey Bogart was a popular leading man. What movie or TV actor or actress makes your heart skip a beat? Jill Hennessy. So things do not change.

3) Sweethearts are those little heart-shaped candies that are printed with messages like, “Be Mine” and “Kiss Me.” Do you like how they taste? No. And they are usually hard as rocks. With an elastic band they do however make great weapons in elementary school.

4) Valentine’s Day is a big day for florists. When is the last time a floral arrangement adorned your table or desk? 2001. The first and only time I received flowers at work. During my clubbing days I went to a bar and ran into a TV producer that once offered me work I was offered lead writer for a TV sketch pilot. But there was only money “after we were bought”. I turned the gig down. But here he was with another guy a woman that looked like a young Marilyn Monroe. They were going to another club. Marilyn told the guys that she’d ride with me to direct me to the club. As we walked to my car I told her I had DJ’d at the club, I could get there. She said, “Since that’s not where we are going so you do need directions.” Now remember this was our first conversation. I asked where we were going. She said, “To my place of course.” The flowers arrived the next day.

5) Do you think an e-card means as much as a conventional card in an envelope? Nope. But it beats nothing.

6) Despite what you see on Valentines, the human heart isn’t bright

red. It’s really a brownish shade of red, like a brick. Now it’s your turn. Share some trivia that’s been rattling around in your head. (It does NOT have to be about Valentines or the human heart. It can be any random fact at all.) Tanaka, a Japanese pitcher who went 24-0 in Japan last year signed with my Yankees. The Japanese ball is different. It’s smaller and the stitching is less high.

7) When is the last time you thought your heart would break? Pass on this one. I don’t really know and if I did I wouldn’t care to share. Hey that rhymed.

8) What is the most recent thing to lift your heart?

Not much. My dad was operated on December 5th. It was a heart valve at age 88. He recovered but now has dementia. Every day it’s worse. We had to take his car and now he’s at my sisters. But he is WAY too much for her to handle. Yesterday I return the car he purchased on February 3rd. They weren’t too happy. Today I called his bank. I’m sorry. I don’t mean to bring this post to a screeching halt. But it’s something I’m dealing with. I do not know the man who was my best friend.

9) Who is the most “hard hearted” person you know? I’ll go with The Dragon Lady. Not because it’s true, I just like taking shots. I wonder if she has stopped cyber stalking me.

Derek Jeter is retiring. The heads of the USSR is former KBG. They only changed the economy. The double toilet thing was funny, however. Paul McCartney released his Wings Over Boston recording. I worked center stage that day, but I didn’t meet him. I tried to make eye contact with Linda, but she never looked at the audience. I almost met him. Too bad, Gal? Yea. Ringo is in Connecticut soon. A former WTIT DJ, Gypsy Joe, gets free tickets to the venue. I tried but he’s not going. I wouldn’t mind paying, but the good seats are gone and I’m not doing a second mortgage. However if Paul stops by, I’ll do it then.  See ya. Same time. Same blog.