Every Saturday WTIT: The Blog brings you a meme calledSaturday 9. It’s not to say that this is a bright idea, but it is what we do. A woman named Crazy Sam started this meme because a prior popular Saturday meme specialist Lola had retired. So, Sam contacted all Lola’s participants and invited us to participate in her meme. Let’s begin!

Saturday 9: I Must Be Seeing Things

1. Have you ever watched something unfold, that as you watched, you could not believe what you’ve witnessed? I grew up on a farm near Blagas, Idaho. Next door lived this strange girl who lived in a castle, named Cindy. Cindy always felt that one day she would fall head-over-feet in love. The fact that she was still alone and chaste, at 30 left her feeling a bit odd. Not that she didn’t have opportunities, for she had dated a lot. Living her life in a house that most would consider a castle seemed to add to her problems. Once a suitor saw how she lived, the man felt insecure. Cindy had inherited the mansion when her dad passed away. He was the only family she had ever known, besides the servants. Mr. Rella had provided for them as well, so that his daughter would always have access to the only world she had known.
It was a beautiful day and Cindy was off from work. She was in a great mood, sliding down the main banister just as she did as a child. “If you hurt yourself I won’t help,”

boomed a familiar voice. It was Frank Enstein, her butler. “You’ve said that since I was five and I have never hurt myself one time!” Cindy smiled. “You’ve had more than your share of close calls Miss Cindy Rella,” replied Frank. All Cindy could think about was the big fall singles dance at her favorite nightspot, Disco Balls. The winter would arrive soon, so tonight was important. Could it be the night she met her prince? She was determined to get it all right. She had bought a new dress from the Victoria’s Not-So-Secret Store. Cindy even bought the fancy pair of shoes she had been eyeing at Thom McCants.

She passed the laundry room where her servant, Hans Jobb was doing the clothes by hand. “Will you every use the washing machine?” Cindy teased. Hans was not amused, he said, “My family has worked for your family for ten generations. We have always taken a great deal of pride in our work.” Cindy went on, “And that means you can’t do things an easier way?” Hans put down the shirt he was scrubbing, “When bats fly out my butt!” he exclaimed. Cindy laughed and headed to the kitchen. She had heard Hans say that phrase a thousand times and always found it amusing. She’d have to eat her dinner quickly to have enough time to primp for the dance

.
Her chef, Ellie Vaytor was preparing her favorite. It was a very famous Italian dish that Cindy loved. She could never remember its fancy name. Cindy was eating quickly. “What’s the name of this fabulous dish again?” she mumbled as she ate. “Cindy, it is called ‘spaghetti’. How tough is that to remember?” Ellie asked. Cindy finished. “I’m off,” she addressed at Ellie. “In more ways than one,” Ellie said to herself.

Cindy had her ride outside.Cindy opened the limo’s door, “Watch your step, Cindy.” “To Balls!” ordered Cindy. “To my what?” asked Trip. “Sorry, Trip. To Disco Balls.” “Right,” replied Trip. She entered the room and her eyes met the stare of the most elegant and handsome man she had ever seen. He rushed over, “Care to dance?” He asked. Cindy smiled. “I’m Cindy and I would love to.” The man led her to the floor. “I’m Charlie Angel, but everyone calls me ‘Prince’.” “And why is that?” asked Cindy. “I treat my ladies right. They say ‘There goes a Prince of a guy’!”
One thing led to the other and Cindy snuck Prince into the mansion. “Tonight I will do the nasty,” she thought, “Get the big one. Do the deed. Finally see a meat p

uppet. Bang a gong. Get it on.” Prince had no idea or even considered this was her first time. When he was finished (which took perhaps two minutes) he fell asleep. Cindy was enchanted. She didn’t know any better. Come morning she snuck out of bed. Today she would serve breakfast in bed to her lover. She woke Ellie up to cook it. Cindy couldn’t boil water. Ellie did a great job. Cindy rushed up the stairs to serve her man. He wasn’t there. The bed was made. He had left a note. “Thanks for the roll in the hay. Gotta get back to the ‘Mrs.’ now. You aren’t very good in bed by the way. Have a nice day.” A stunned Cindy looked at the tray and shrugged. “His loss, “ she thought, “Cause now I get to eat two breakfasts!” And no one lived happily ever after. Ta-da.

2.What is your favorite city in the world? Why? West Hartford, Connecticut because it was the birthplace of WTIT. We just began our 45th Anniversary Year. And of course, our first recording in our brand new studio. Here’s a pic from WTIT Studio 33 1/3.
3. What is the strangest film, to your sense of reality, that you have ever seen?
And of the later year Star wars movies. I walked out on one, left the room for another. I somehow avoided the third. The were right up
there with the absurd Matrix sequels.

4. It seems that the
older that you get, the less you want the hassle of seeing a

live
concert. Who is an artist or a band that you’d actually pay to see?
Paul comes to mind. I’d also love to see U2, Springsteen and
Sting.
5. When was the last time that you lost your temper?
What time is it?

6. When you were little, did you think “sex”
was a bad word? My sex talk with my mother was at age 12. She said
that I was getting to the age when certain girls would let me touch
them in places I shouldn’t. I thought, “Wow! I can’t wait.” It
then became my goal to get a girl naked. By 14 I had done it. Thanks,
Mom!
7. What does your smart phone do that really surprised you when you loaded the app? I programed my Tivo from work this
week. Cool.

8. Have you ever been attracted to someone that
you should not have been? (Feel free to take this lame question any
way that you please.)Of course. But there’s a big difference between
attraction and action.

9. Will you see the new “The Three
Stooges” film? Yes. I really can’t wait. 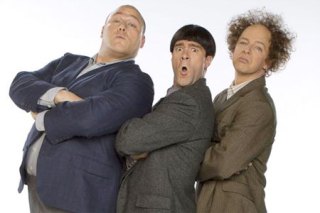