Get Me to a Phone Booth 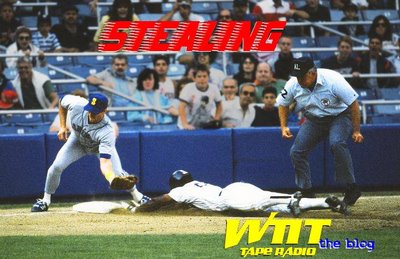 Welcome again to Stealing which we bring you weekly on The WTIT Blog. We have gotten really good at just stealing a meme from someone else’s post. (You can play meme with Judd and the official Sunday Stealing meme.) Today we ripped this off a blogger named Tense Teacher of the blog Tense for a Reason. (Yes we know that we’ve ripped her off not so long ago as well. It’s pretty amazing since she stopped posting in 2007. But that’s where we live as a thief).
Also, it’s long so we’ll do it in parts. She does not say where she got it from. But, it was probably stolen there as well. So, of course, that will be as far as we go.  Tracing back our theft’s thieves might take some time. Let’s go!

21. Did you go to your high school prom? Yes, but I don’t remember much. I do remember returning my date the next day to get her swimming suit. Her folks were not pleased that she never came home. Man was that crappy. Eight couples were all waiting with me for her. I said, “Get me to a phone booth. I’ll get another date.” Our caravan of cars proceeded to the the phone and then the next house. Date number two was waiting with towel and suit in hand. (Yes, I know that this doesn’t sound like me at all. But it is true.)

22. Perfect time to wake up? When your eyes open and you can’t fall back to sleep.

23. Perfect time to go to bed? When your very sexy fiancée suggests it.

24. Do you use your queen right away in chess?I last played chess in 1969 at prep school. You’re not gonna believe that I really don’t remember or care.

27. What age is this exciting life over for you? Probably when I stole this fucking meme.

28. What decade during the 20th century would you have chosen to be a teenager? The 60s because that’s how it played out for me. The 60s defined who I am.

29. Favorite shoes you have EVER owned? The black ones.

30. Do you have an article of clothing you have had since you were in high school? Holy shit! Where did my high school football jersey go?

33. Have you ever written in a library book? Why did you rent one that said “Bud was here”?

34. Allergic to? Republicans and their worship of “job creators.”

35. Were you ever in a school talent show? In college. My roommate and I got booed. That was a fair reaction to our comedy sketch. Had we been shot to death, that would have been a fair reaction as well.

That’s it for today on
WTIT: The Blog.
Enjoy your Sunday…
We will return.
Just a fair warning.
Peace & love, friends.
Join us. Same time. Same blog.