>Sometimes It Makes No Sense 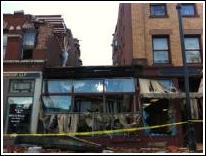 This article was written by WCVB, Channel 5 in Boston. It always hits you harder when it’s close to home. I drive this street every week.

As a deadly tornado bore down on the town of West Springfield in central Massachusetts Wednesday, one Union Street mother told her 15-year-old daughter to get in the bathtub. She then lay over the teen, trying to shield her. Minutes later the house collapsed, killing her.

Her daughter survived and remains hospitalized, according to West Springfield Fire Chief William Flaherty. Their names have not yet been released, but their story is one of the worst emerging in the wake of the terrifying storms that raked the commonwealth, leaving ruin behind.

By dawn’s early light, thousands of Massachusetts residents began to get a good look at the devastation wrought by the deadly tornadoes that ripped through the Bay State, killing four people and leaving a swath of destruction through 18 communities, including Springfield, the state’s third-largest city with a population of 150,000.

“You have to see it to believe it,” said Massachusetts Gov. Deval Patrick.

“We met a couple who just made their last mortgage payment and their house is completely destroyed,” he said.

Crushed buildings, shattered windows, crumpled cars and hundreds of torn trees littered streets and neighborhoods from Springfield through Monson and Brimfield, neighboring communities in the central part of the state, about 90 miles west of Boston.

2 comments on “>Sometimes It Makes No Sense”