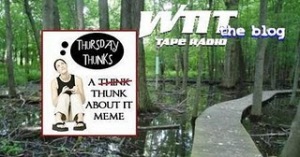 The TT questions are brought to you by Bud, the color of discovery and the number zero zero seven.

Thursday Thunks: Back to High School

1. Who was your best friend? Sylvia Rentalot. I don’t really remember all that much about her other than she was stunning when naked.

2. Did you play any sports? Besides “Hide the Sausage”?

3. What kind of car did you drive? A 1965 Mustang convertible. Oh wait. That was my friend Johnnie Walker. I drove a clunker Plymouth Belvedere. Not a babe magnet.

4. It’s Friday night. Where were you? We’d always start out at the WTIT Studio, If we had dates we’d leave to do them. If not, we’d continue recording until we came up with something better. Which meant a lot of times we recorded all night.

5. Were you a party animal? Not at first. I was the last DJ on WTIT to get drunk. It wasn’t that I had a moral thing with it. Everyone drank beer and in spite of my name I am not to this day a beer drinker. One night someone asked if I wanted a screwdriver. I asked what it was. My friend Bull Durham said, “Smirnoff and OJ”. That was the night I got introduced to Smirnoff. Oh night devine.

6. Were you considered hot? Smoking.

7. Were you in the band, orchestra or choir? Choir one horrible year. All we sang were show tunes. I still cringe when I hear “Oklahoma”.

8. Were you a nerd? No. I was more known for how many girls I was dating at one time. It went well before they found out about each other. (Group shot on left.) Although, we all got along well!

9. Were you ever suspended or expelled? Close, but no. In public I use to get detentions for talking in class. That school had a rule that 10 detentions equaled a three day suspension. While the Vice Principal was explain this I interrupted him. I said, “Look you are talking to me as though I were a bad kid. I talk in class. I’ve spent ten hours paying for that crime. If you want to give me a three day vacation than just do it. But I am not going to listen to another second of how bad I am.” He shut up and didn’t suspend me. Then he called my mother to tell her how much he liked me. I am glad I resisted the temptation to tell him to “fuck himself”.

10. Can you sing the fight song? I can’t sing “Happy Birthday”, but I am guessing that’s not what you mean. I went to two different schools and no I don’t remember the dumb fucking “fight songs”. Peace, bros.