Too Much Time on My Hands

1. From whom did you get your last e-mail? Berleen. She responded to an email I sent about this meme. She said to say “hi” to everyone and vows to write one of these fuckers soon.

2. What is the most recent movie that you have seen in a theater? I think it was the Brendan Fraser in a 3D remake of Journey to the Center of the Earth.

3. Have you ever seen a ghost? You mean like Judd Corizan? Not really.

4. Ever loved someone so much it made you cry? Only when my attorney billed me for the divorces.

5. What are you most afraid of? The Wicked Witch of the North. Or South. Whichever one that had those flying fucking monkeys.

6. What do you do when you are bored? Have I mention my good friends Michelle and MaBelle? Oh, right. Well they’re French twins who live upstairs. The night we met we played strip poker. We’ve gotten along VERY well ever since! So, I don’t get bored a lot.

Although I do have a neighbor whose girlfriend thinks I run a psychiatric clinic. She gets drunk now and then and bursts in. It was kinda of amusing watching a drunk 35 yr old naked woman (with a rather great body) prance around my apartment. That was until she did it after my lady moved in. We now always have the door locked.

7. Other than the author of this mess of a meme, who blog are you most curious to see their answers?

Sorry, even though I wrote this stupid question I can’t answer it. There are at least 13 or 14 people who I love to read their responses. 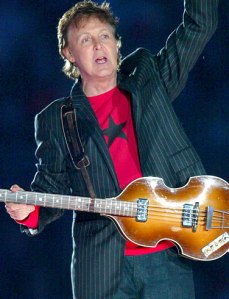 9. Who was the last person who complimented you on how you looked, that actually was a surprise? Anytime my lady compliments my clothes I am surprised. She has rather strong opinions on what is or is not a fashion faux pas. When I was wearing a Beatles tee and navy blue sweats at 10 PM she told me that the sweats were out. She is very lucky about how crazy I am about her. I mean really? A faux pas in PJs?

10. Do you remember Berleen? She is and will always be a friend of mine. She is just a really neat lady. I like her a lot.

11. What was the last concert that you attended where the band was much better than you imagined? Yes. My lady loves country fairs and in New England ‘tis the season. She told me Dennis DeYoung was playing the Woodstock Fair. She read that he does the music of Styx. I always like Styx, but I am not exactly a Styx-freak. I asked if he was a tribute band. She hadn’t a clue. It turned out he was indeed the lead singer of Styx until the two main players had a falling out a decade or so ago. When we got to the stage area there were about 50 to one hundred people sitting on blankets. Obviously no one knew who he was. The dude is 63. I expected nothing. I mean the fucker is at a country fair. 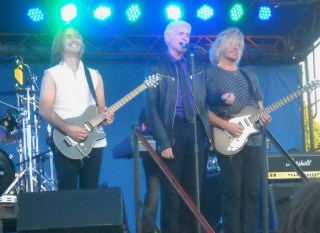 When he hit his third song Lady, over 1500 people had crowded in and the cops stopped any more from entering. There was no pushing. We sat on the grassy knoll about five rows from center stage. His band was tight. The dude wailed. He held notes.

My lady said he was note perfect at his age doing 70s rock. She’s not even a fan, but she has the best ear I’ve ever encountered. So my friends, I’ve got this one as a great one that was better than expected. If DeYoung plays near you, run don’t walk. Here are a bunch of photos that my lady Kathy took. 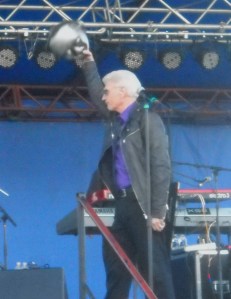 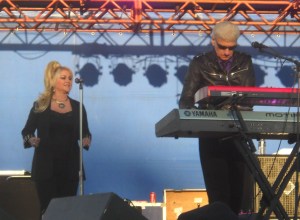 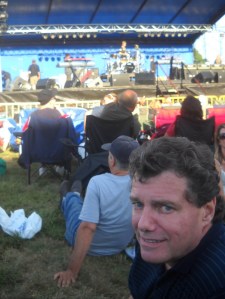 12. What’s the next band you’re either planning to see or want to? We are planning to see Mark Lindsay of Paul Revere and the Raiders at the Big E. The Big E is Western New England’s annual regional fare. We are really psyched. If he is half as good as the Styx dude was, it will be fun.

13. What were the last things that Kimber threw off the roof? Her coffee table. Oh. Thanks for stopping by. We’re back with  Rock ‘n Roll Fridays !! THE MONKEES!

That’s a Thursday at the Tape Radio Blog.
We hope we’ve made a valuable
contribution to The Blogosphere here.
We realize that is a lofty expectation.
WTIT: The Blog is back tomorrow.
Either way.
It’s Rock ‘n Roll Fridays with Monkees.
Same time. Same blog.

26 comments on “Too Much Time on My Hands”