Being Late Twice This Decade

Welcome to Wednesday Wickedness on WTIT: The Blog. This meme appealed to us because of a twist in its concept. Each week Janera Jepson (its host) picks a celebrity. She digs up ten quotes from the person and asks her questions based on the quotes. Who would think someone would do something original? We didn’t see that coming. Anyway, she is a friend of Crazy Sam, so we are on board. Let’s do it. The quotes and meme questions are in bold.

1. “But why shouldn‘t I speak out? Don’t you speak out in this country?” Do you speak out as often as you should? In the last decade I would say yes. My problem used to be speaking out when I should not have. I am sure you are shocked as shit at this admission.

2. “I am tough. Sometimes I’m unreasonable. I have to catch myself every once in a while.” Are you ever tough and unreasonable? Yes. I

think I am better at this too, but I’d be lying if I said that I didn’t realize that I can be unreasonable. I don’t think that I’ve ever treated employees the way the George did, however.

3. “I haven’t always done a good job, and I haven’t always been successful – but I know that I have tried.” Do you believe that sometimes you learn more from a failure than a success? You learn a lot through failure. I am an expert on divorce, as an example. I think we can learn by success as well. Wow. I am pretty non-committal today.

Perhaps I should have a Smirnoff.

4. “Winning is the most important thing in my life, after breathing. Breathing first, winning next.” Do you feel that you always have to win? Yes. You know that I do God’s work by selling liquor to the folks of Massachusetts. I always want to be my company’s top sales person, in a way that goes beyond money. Sometimes, I am. Others, not so much.

5. “It is unbelievable to me that the highest-paid team in baseball would start the season in such a deep funk.” Do you

think money always buys greatness? No. But without money, you really have no chance. You can spend or earn a lot of money, and accomplish squatzola.

6. “I take my last phone call at home at about 11pm.” What time is too late to call you? I don’t like getting calls during or after Happy Hour. So, don’t call me after 5PM. London time.

7. “Don’t talk to me about aesthetics or tradition. Talk to me about what sells and what’s good right now.” Do you think tradition matters? Yes. I am surprised to read that George said that. The Yankees are all

about tradition. However, my best guess is that he was acknowledging sports fan’s attitude of “what have you done for me lately?” And that is true. The Yankees are my favorite sports team. I watched my first game when I was eight years old. At 11, even though he hated the Yanks (and still does), my dad brought me to at least two games in the Bronx. There is something about fathers and sons with baseball. I took my dad and my son Ben to the original Yankee Stadium in 2008, for one last time during its final season (before moving to the new one).

8. “And what the American people like is to think the underdog still has a chance.” Do you tend to root for the underdog? I think we all enjoy that. Obviously I was lucky with picking a favorite baseball team. But in college basketball we root for UConn in my family because 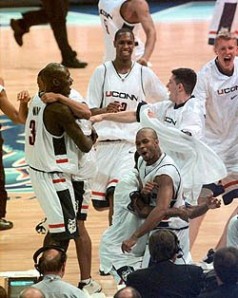 my dad was captain of that team in college. They sucked for so long. I remember when they made their first Final Four in 1999 that I cried. I was SO happy my dad had lived to see it. He’s still around and Bierne has seen UConn return twice. In their three appearances they’ve won it all twice, in 1999 and 2004. Jim Calhoun, UConn’s current Hall of Fame coach, invited my dad to watch a practice privately a couple of years ago after The Hartford Courant did a front (of the sport’s section) page article on my dad. I was honored when my dad asked me to join him to meet Calhoun.

9. “I don’t think I ever could exceed my father’s successes. He was a completely satisfied man, he knew what he wanted to accomplish and he accomplished it. I did do a lot, though, to try to please him.” Do you ever feel that you want to exceed your parents’ successes? I certainly did when I was younger. I think in some ways I have and in other ways not. I do like the person that I’ve become. But that’s more about the

French twins. They make me proud to be an American. And it is not all about great sex. Or maybe it is. This is another admission that I’m sure shocked you.

10. “I’m really 95 percent Mr. Rogers, and only 5 percent Oscar the Grouch.” In terms of cartoon characters, who are you like? Mr. Rogers and Oscar are not cartoon characters, Janera. I thought you wrote some of the best memes until that question. Now I think you totally suck. If I had to pick a fictional character that I am most like, I’d pick Alan Alda’s portrayal of Hawkeye Pierce in the TV version 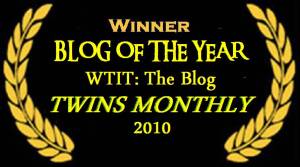 of M*A*S*H. He obviously had better writers than I do. Although, we recently did just win the Blog of Year by Twins Monthly. We are all pretty proud around here about that. Happy Hump Day. Join us for Thunking.

That’s that for a Hump day.
We will return with something
equally fucktardian.
We should be Thunking.
WTIT: The Blog will be back.
Whether you are ready or not.
Same time. Same blog. Peace.

12 comments on “Being Late Twice This Decade”