Going to the Moon, Alice

Welcome again to Stealing which we bring you weekly on The WTIT Blog. We have gotten really good at just stealing a meme from someone else’s post. (You can play this meme with Judd and click on the official Sunday Stealing meme.) Today we ripped this meme off from a blogger named NotBob from NotBob’s Bits. He states that he got it from Milly Big Fat Me. But, it was probably stolen there as well. So, of course, that will be as far as we go. Tracing back our theft’s thieves might take some time. Link back to us at Sunday Stealing! Tracing back our theft’s thieves might take some time. All meme questions are in bold.

Is easy to love? Michelle and MaBelle, the French twins who

live upstairs from me. For those of you who enjoy their appearances in this blog, I did not make you wait.

Do you just wanna smack? Anyone who thinks that Sarah Palin is relevant, or doesn’t believe we should support our troops by getting them home, or thinks some emails mean global warming is a myth, or thinks health care should be left alone because they can afford their coverage.

Do you trust? Not a soul. I am seldom disappointed.

Do you talk to when you’re alone? My dog Hap

py. You might remember he’s a virtual dog. He’s just a photo, but that makes him SO easy to care for. Anyway, he understands me as much as a real dog would.

Dangerous things do you

do while driving? Just sex. But I suppose everyone will say this.

Are you allergic to? Ex-girlfriends that won’t stay away. I can’t even begin to tell you how excited I am each and every time that she has others contact me with her absurdities.

Is the freakiest thing

in your house?… Stuff women who stay over here leave. And they all leave something. I theorize that they think it will make me think of them. They just never grasp that since every woman does this, guys have no clue as to who left what.

Is it time to turn over a new leaf? No. I hate that expression. What does a leaf have to do with making changes in your life? And, I am fucking perfect as I is.

Will you be all that you can be? I hate military recruitment slogans. Bite me.

Is enough enough? Recently it has been when a couple of people who think it is their right to suggest how I

should live my life. If I had wanted their input, I would have put up a fucking virtual suggestion box on The Blog. Don’t count on that one anytime soon.

Do you go to the dark side? I did last night. Then she said, should we leave the lights on this time?

Are your pants? There’s $20 for anyone who can tell me. It was a rather wild night.

Is your last will and testament? How could anyone ca 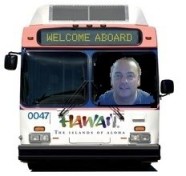 re about this? Yesterday it was that bus ride. Although, I am organizing a blogosphere trip to Hawaii to ride on Thom’s bus. Email me for details and reservations. It will be like we’re “going to the moon, Alice!”

Is your junk food stash? No junk food, no stash. Could I interest you in something in a Smirnoff?

Is Carmen Sandiego? If you were going for an all-time stupid meme question, congratulations! You’ve done it.

Was the Lone Ranger alone? He was never alo

ne. He had Tonto and a ton of groupies.

Was The Scarlet Letter scarlet? I hate questions that are moronic but the author thinks that she/he is disguising the fuckers as clever. 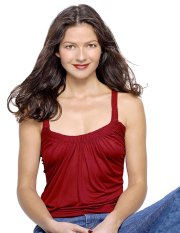 Are musicians sexy and plumbers not? Can I go with Jill Hennessy here? I mean she is incredibly sexy. Plumbers and musicians? Not so much. Plus I get to post Jill’s photo today.

Are there no seat belts on school buses? I figure it’s because our congress could pass a bill to regulate the college championship series but not figure out health care, war, jobs or the economy.

Swim the English Channel for a doughnut and

Forgive someone who deliberately hurt you? Yes. I think we all have. In my experience people do some strange shit to their lovers and friends. It’s called being human. As long as they admit the transgression, without rationale or explanations I could deal with it.

Rather believe a lie if it hurt you less than the truth?

No. It’s part of me not being a moron, truth be told.

You still be alive if you were sucked out of an airplane window? No. I am SO glad this fucker is over. I mean, really. How many people are sucked out of windows? I always thought sucking just occurred in first class.

That’s it for today on the
WTIT: The Blog.
Enjoy your Sunday.
Or Monday, if you are late to the party.
We will return. Join us.
Same time. Same blog.

21 comments on “Going to the Moon, Alice”