How May I Help You?

Posted by Bud Weiser, WTIT on October 28, 2009
Posted in: What the Hell Wednesday. 18 Comments

When we noticed a new meme in the blogosphere from some faves of ours, Living Dead Nurse and Mejis, we joined in. It’s called What the Hell Wednesday. At this point to WTIT: The Blog, what’s one more meme? We lost all creditability long ago. We gave it a whirl. It worked. Here we go this week! All meme questions are in bold.

What the Hell Wednesday: I See Dead People 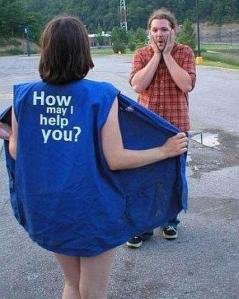 1. What is the scariest person you have seen in Wal-Mart? As opposed to who? Probably the greeter. Some of them seem way too happy to work there.

2. Are you superstitious? Name something that you believe or that you can’t believe others believe. Religion comes to mind.

4. What was one of the homemade costu

mes you have worn? I have a great homemade George Clooney costume. Who cares about scoring candy when women are dropping to their knees?

5. Did you ever play tricks on anyone during Halloween? Yes. One year I went to the twin’s apartment dressed as George Clooney. They said, “We think you’re hot, but we’re waiting for Bud. Sorry.”

7. What was your/or someone else’s worst thrown together costume? B.B. Bacardi, a former WTIT DJ once came as a guy in drag. I still have nightmares.

8. Did you go to a lot of houses to get candy or ju

st get enough candy and go home? I went for the whole shebang. Don’t let anybody know, but I do this with women as well.

9. What do you hate most about Halloween? Halloween memes.

10. What do you miss today that you had in the past Halloweens? My neighbor’s wife’s sister. Oh, the memories.

11. Do you think kids costumes are better now or then? Another meme assuming I am a 30 something with kids. No one ever brings their kids here. Which is smart because there are some weirdos here. (No offense intended to either the twins or my neighbor’s wife if they read this.)

u were the only person left…everyone else was gone (like in the twilight zone episode) I wouldn’t break my fucking glasses.

13. What is your favorite Halloween creep? A naked women coming at me on her hands and knees, slowly. Well, you asked.