That’s Where the Smirnoff Is

We don’t do a lot of memes other than Saturday 9 and Sunday Stealing unless we are tagged. But we saw this “2008 in Review” meme going around on so many of your blogs that we thought we’d give it a go. We don’t know where we saw it first but we lifted it from Debbie’s blog. We thought ending the year with a meme was rather appropriate since we’ve made so many great friends through those weekend memes. Meme questions are in bold.
2008: The Year in Review

What exactly were you doing a minute before the ball dropped in 2008? I was at a bar with my Dad. It’s a

bar that he sings at when they do the “piano bar” thing. (They had a band that night. However the leader of the band was the piano player who we both know very well.) Anyway, I was hitting on this very attractive woman. She was really into my humor. We danced and laughed; yet I was not getting anywhere. Now, I know I make it sound like women drop to their knees upon meeting me. But I think my friends here know that it’s all shtick. But, still, I do fairly well with the women I meet. Yet, with all this going on with this particular woman, I sensed I was getting nowhere. At the “minute before the ball dropped in 2008” I watched her start to make out with another rather vigorously. I then got my answer. The woman was a lesbian. Oops.

What was your status on Valentines Day? Alone Again, Naturally. A rather s

tupid song by Gilbert O’Sullivan from the early 70’s. A great title, however.

Did you have any encounters with the police? I had a knock on the door one night and I opened it. Two detective types inquired if they could ask me some questions. I stated “Sure” and allowed them in. They asked me all about the son of the couple who lived next door. I said that I didn’t know that they had a son. The cops stated that they were already aware that the kid had wild parties with booze and drugs. I replied that they must be really quite parties because I never hear or saw one. It all made NO sense. It turned out that my neighbor’s son was about to become a cop and this was part of an internal investigation. So, I was being set up. But my neighbor was very pleased. After my interview, his son was informed that he got the job.

Where did you go on vacation? Anyone who reads this blog knows the answer. I went to the Jersey shore with my kids and grandkids. You folks were great to put up with the pictures and stories. If you missed any you can further punish yourself and read one here.

Did you know anybody who got married? No. Everyone I knew was spared that ordeal. Although my money is 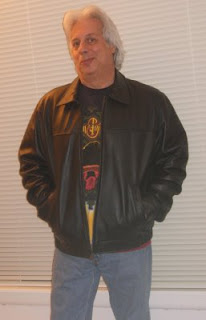 now on Vinny Bond from ”The Big Leather Couch” and his Darlin’ Nancy will get married in 2009. I love reading about their relationship. He seems truly happy. When I’m not jealous (only kidding) I’m happy for him. I probably won’t get invited to that either. 😉

Did you know anybody who passed away? Not personally. But we acknowledged here on the WTIT Blog the passing of Bo Diddley, Tim Russert, George Carlin, Bobby Murcer, Paul Newman and Levi Stubbs. Rest in peace, gentlemen.

Did you move anywhere? Only back and forth to the bar. We wouldn’t have moved that far, but for one fact. That is where they keep the Smirnoff.

What sporting events did you

attend? We go to a lot of UConn basketball games, but the highlight was the trip to Yankee Stadium with my son Ben, his wife Maria and my dad Bierne to see the Yankees for one last time before Yankee Stadium was closed for good.

What is the one thing you thought you would not do, but did, in 2008? I really tried to stop sleeping with married women. But, I can get carried away at times. I could always do yet another resolution about that.

What was your best month? It had to be August. Our family vacation was EXCELLENT! (I may have mentioned that before.)

How many people did you date? 42. But I didn’t sleep with all of them. Wait. Nope. Not all of them.

Other than home, where did you spend most of your time? Out.

Have you lost any friends this year? Not since I put GPS collars on them. People can be pesky to follow without a technological advantage.

How old did you turn this year? 256. And you don’t have to say it: I know that I look at least ten years younger, I know.

Do anything embarrassing? Only while awake.

Get married or divorced?

BWAHAHAHAHA! That ship has sailed.

Been naughty or nice? Only when naked. 😉

What are you looking forward to most in 2009? Delivering my acceptance speech for winning “Best Humor Blog” in the Blogger’s Choice awards. This plan does have one serious flaw. WTIT: The Blog has not even been nominated yet. *

*Update. We were wrong. It turns out that if you are nominated in one year, it rolls over. Thanks to Mimi for the nomination in 2006. So, for this stupid bit of ego and self-promotion, our bad. It won’t happen again till next time…
And that, for 2008 is that.
We had a truly wonderful year here in the
blogosphere. We hope that we’ve given
back the friendship that we have truly enjoyed.
Don’t drink and drive tonight.
But rock out! Live it up!
But don’t live it “so up”
that you can’t live it down.
WTIT: The Blog will return in 2009.
Join us then. Same time. Same blog.

18 comments on “That’s Where the Smirnoff Is”